Sound Design in a Moment

When people hear the phrase “sound design,” they tend to think Star Wars.

These momentary onscreen sounds are known as hard effects. In most films, you’ll more often hear unassuming hard effects like a door closing or a car pass-by. They’re typically things on screen making a sound for a short period of time. 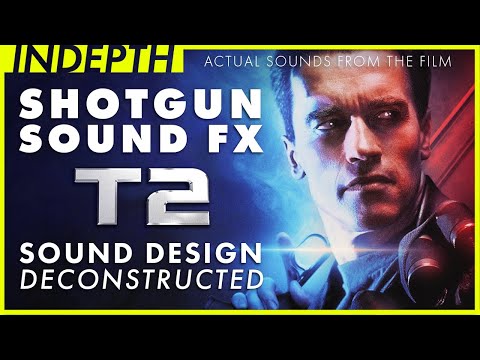 That sound could have just been a shotgun going off in a hallway, but there’s a lot going on in that blast. And it’s not there just so it can sound massively cool—it’s all there for a reason.

Arnie shoots that same gun 6 more times afterward, but it’s not the same as that first massive blast. The subsequent shots are more bare. They don’t have the canyon echo and the other accoutrements. That’s because that first shotgun blast needed narrative weight.

We, as the audience, have some revelations when that shotgun is first fired:

You can’t just tack on this kind of impactful sound design in post-production as an afterthought.

In most cases, it’s the writing, staging, and editing of the scene which allow for that kind of layered, meaningful sound design to happen.  It’s important to know that most great sound moments are actually born from the writing and directing. It’s a whole other topic I should cover at a later time.

From the Ordinary to the Hyper-real

Sound designer and re-recording mixer Gary Rydstrom mentions in the video’s commentary that in the early 90s, James Cameron communicated to him the concept of hyper-real—bigger than life sound. It’s crazy to think that was a novel concept 30 years ago. Now we’re neck-deep in Transformers and Marvel type films where there’s no shortage of aural hyper-reality.

But you can have a damn good time with everyday sounds, too.

A couple of years ago I interviewed sound designer Mark Mangini. He won an Oscar in 2015 for supervising the sound on Mad Max: Fury Road. His resume is incredible. You might think I jumped to ask him about the flamethrowing guitar or Furiosa’s war rig, but I was more excited to talk to him about doors.

A door is a ubiquitous object, but it’s also one of the more diverse and complex mechanical devices we interact with every single day. Because of those mechanics, we can use doors as an opportunity to express ideas and emotion.

Mark is a passionate guy and it’s fun to hear him philosophize about sound. I knew mentioning doors to him would get him excited and elicit a great response.

I basically just said to him, “Alright, Mark. Doors… Go!”

What followed is this 2-minute gem. 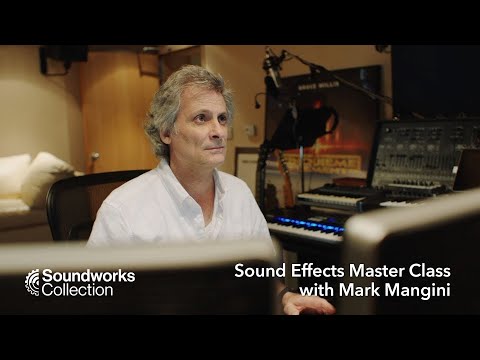 Sound Design of a Scene

Before you started reading this, it may have already been obvious to you that sound design could be a light saber or a T-Rex roar. But if you think about sound design as having an arc over the duration of a film, we’re now getting into the scope of what sound design actually is.

Sound design is everything you hear.

Only later did it start meaning the creation of sounds that we’ve never heard before. 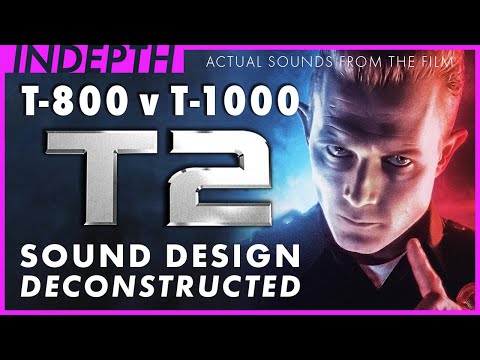 In that scene, you obviously heard a lot of great hard effects; but let’s think about how sound develops over the course of the scene.

The first thing to notice is how quietly it all starts.

The sounds of the Terminator’s footsteps/leather/zippers/buckles help to inform the audience how quiet it is. The suspense builds until the T-1000 lunges from out of nowhere and triggers a tense melee. T2 as a film uses the juxtaposition of LOUD quiet LOUD often, and it’s an example of one of our most powerful cinematic tools.

You can’t have an effective loud moment without a quiet moment. The most powerful chorus of a song comes after the stark, quiet verse. The most terrifying sound in the world can be made to be even more spine chilling if there was pleasant, soothing wind before it.

Another sound detail is what isn’t in the scene. There’s zero dialogue. But wait. Not only is there no dialogue but there aren’t even the sound of “efforts.” Efforts are vocalizations of exertion or pain—the “UNH!” when someone throws a punch, or a “HNNG!” when lifting a heavy object.

What we don’t hear in the scene is also important, and tells us things about the characters and the story.

You see, the company that created the terminators, Cyberdyne, got some things wrong when programming these machines. When they exert themselves, they don’t vocalize. They don’t scream out in pain. They don’t pant in exhaustion. (Do terminators even breathe?)

It’s one of the things that makes the terminators seem oddly unhuman. Cyberdyne’s bug is actually a feature of T2’s soundtrack. The terminators’ disturbing silence is one way they reveal their lack of humanity.

Even the ambience track is reacting to the action you’re seeing. Everything surrounding the scene is made to be alive, giving you information and moving the scene forward for you to react to the story.

As things get weirder and more intense in the scene, so does the environment. Those environmental sounds are also foreshadowing the mechanical clunking of the gears that the T-800 ultimately gets trapped in. It’s a smooth and invisible transition, much like music in a film, the audience shouldn’t notice when it’s entering or exiting a scene. We want it to gently manipulate our emotions without our detecting the seams.

“The visual material knocks on the front door … Sound tends to come in the back door, or sometimes even sneak in through the windows or through the floorboards.”

There is Sound Design in Music

Speaking of music, the Terminator 2 score is notable. It utilizes lots of metal and mechanical sounds that fit perfectly in with the themes of the film. You can’t underestimate the sound design aspect of your score to also support the content and themes of your story. The composer of T2’s score, Brad Fiedel, has some interesting words about how he walked the line between music and sound design.

“One director I’d worked with in the past came out of the Hollywood premiere screening of [T2] saying, ‘This is definitely starting a new era off.’ He was referring to the kind of seamless relationship between music and sound effects, because he couldn’t tell the difference between what I had done and what they had done, and in some cases, there were things I did that were very much sound effects in a sense, though I didn’t intend them to be.” – Brad Fiedel, Composer, Terminator 2: Judgment Day

For a fantastic deep dive into T2’s score (and one of the best Arnie impressions out there) check out Alex Ball’s amazing video. 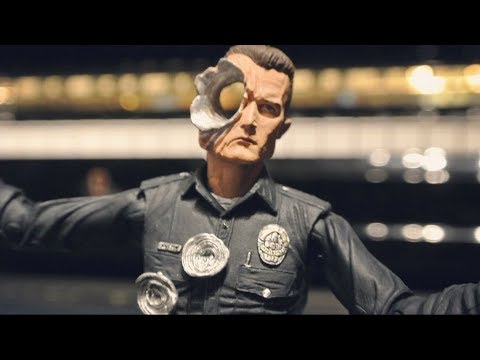 By the way, Brad Fiedel’s director friend was right. We’re in an era now where music is being completely embraced as another opportunity for sound design. Bombastic, melodic orchestral cues are often replaced with textural mood pieces. Terminator 2 was one of the first blockbusters to really pull it off in the mainstream.

Sound Design Can be an Entire Film

You may be familiar with this image that made the internet rounds a few years back.

The image contains a frame of every shot in the James Bond film Skyfall. When you see those frames together in a single image, a hidden pattern in the film’s cinematography and color grade reveals itself. By seeing the film in this way we see a clear, deliberate visual arc that is expressed over the entire 144-minute film.

Although less obvious, sound design can communicate with a similar aural arc.

OK, so, waveforms don’t really give us the best example of this.

A better example is from the film The Matrix. The film’s sound designer Dane Davis talks about how the sound design of the fight scenes (whooshes, punches, kicks, impacts) over the course of the film create its own arc. In his words:

“We wanted to have a developmental arc from the first fight to the last fight so that we didn’t use up our whole arsenal [of sound effects] right off the top with this first training fight. We kept it deliberately very restrained and pretty naturalistic, comparatively speaking, so that in the final sequence between Smith and Neo in the subway station we could pull out all the stops and make that extremely physical and huge and explosive and painful on every level.“ ~ -Dane Davis, Sound Designer, The Matrix

See this Instagram post by INDEPTH Sound Design to dive deeper into the sound of The Matrix:

All of the above examples are, of course, massive Hollywood blockbusters. These are the types of films that come to mind when people think of sound design. In fact, every film I’ve mentioned in this post won an Oscar for either Best Sound Mixing or Best Sound Editing.

But only using this type of sound design in massive films doesn’t have to be the case. It shouldn’t be the case. The concepts I’ve mentioned work for all films and, really, they’re the very essence of cinema.

Sound Design Can be Expansive

In the original Star Wars trilogy, there’s a substantial sound design arc that takes place over the course of all three films, although you might not notice it.

In Episode IV, Ben Burtt and George Lucas noticed that the sound of light saber fights had a musical quality. For those scenes, they decided to forgo music altogether. They enjoyed the musicality and the raw credibility the sound of the light sabers projected.  Consequently, John Williams was able to take a much-deserved break for those scenes.

But as the trilogy builds, and the connections between Luke and Vader grow, more and more music finds its way into those scenes. The music builds on top of that strong foundation of the light saber sounds to culminate in Luke making amends with his father. So don’t let sound design limit you to the scope of a moment, a scene, or even an entire film.

The same thing happened in The Matrix trilogy. No one knew there would be two more sequels, so sound designer Dane Davis would have to extend the developmental arc of the fight scenes even further. Dane says:

“As it turns out, because of the two sequels [to The Matrix], we had to, in fact, extend that arc another five hours to the end of “Matrix Revolutions,” at which point we were cutting in cannon blasts and you name it to make those hits between Smith and Neo in the air even more powerful than anything else you’d heard in the previous two movies.”

Maybe your comedy short isn’t full of bigger-than-life violence or sci-fi vehicles, but some moments, even entire scenes, might beg you to take the sound design to a tasteful place of hyper-reality to extract those extra laughs. Your dramatic romance film might necessitate a horror-esque wind howl to tell the audience something or create aural interest and style. After that, challenge yourself to take your cinematic sound beyond just the moments.

If Mark Mangini can get excited about doors, any kind of film can utilize exciting sound design.

To be cinematic is to be bold with sound. Go the extra mile! 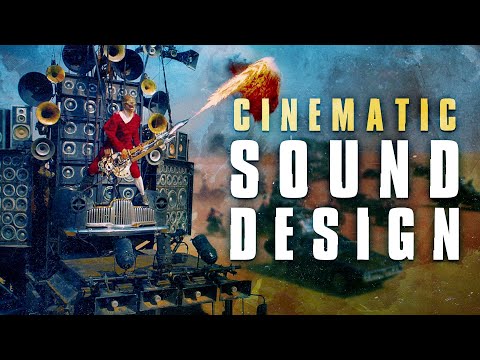 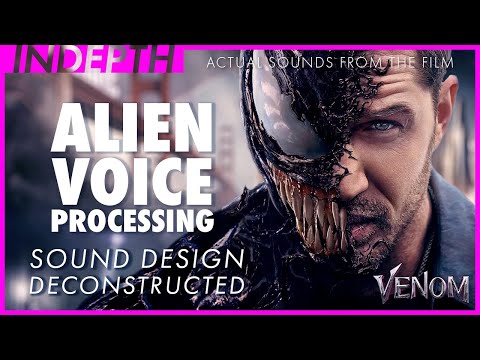